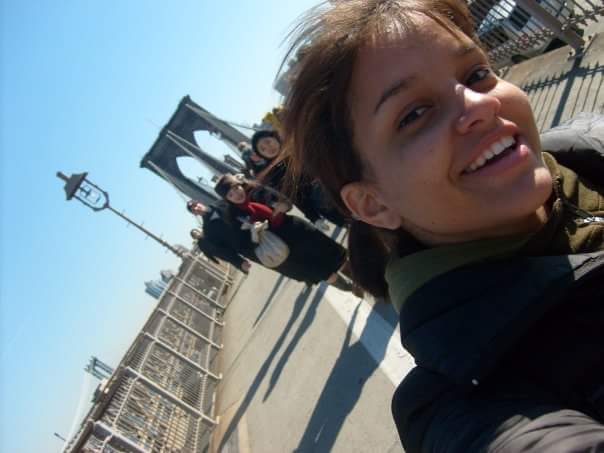 I remember the day I first walked over the Brooklyn Bridge in New York City as if it had only happened yesterday.

To cut a very long story short, I had gone to the Big Apple with stars in my eyes on the word of someone who had promised the world but had deceived those who had laid their trust in him. Not all people are blessed with the ability to save themselves, especially at the age of nineteen with only one year of “adult responsibility” under their belt, but even less have parents that would drop everything at a moment’s notice to help.

My father is such a man.

“I’m so proud of you that it makes me proud of me. I hope you know that.”
― John Green

Sometimes when friends or colleagues talk about their parents, I sit and listen quietly. I hear stories filled with pain, with abuse, with desertion. Mothers and daughters unable to see eye to eye. Sons lost without the guidance of their fathers. They sympathise with each other, sharing their tragic experiences. But I can’t contribute to the heartache. My parents are fantastic people.

I feel a sense of deep gratitude towards my parents, who I believe with all my heart did the best that they could for me and my siblings. They have successfully produced three beings who – to use a sea-related metaphor (as we all work on cruise ships) are all able to command their vessels through the ever-changing sea of life. I know there are people who look at them, or listen to snippets of stories about my parents and would like to have their own opinion on how they have failed or should have done better.

They should check out the Ark in their backyard before looking at my kebab sticks.

What I appreciate most is that my father never once when I found myself in a serious situation said “I told you so”. Even now I know I can pick up the phone and send a message, and I will get the most objective response and advice for someone I know subjectively only wants the best for me and wants to see me succeed.

In this specific instance, he was not the proverbial knight in shining armour. This man heard my cry for help, and realising his own armour and steed would slow his journey, travelled halfway across the world with only what he needed to get there in order to do what needed to be done. Aragorn, ready to risk life and limb to get the Fellowship where they needed to be.

I had tried in my first month to cross the Brooklyn Bridge by myself, but I was too scared. I didn’t have enough time in the day, there were too many people walking past, and the further along I went the louder the vibrations from the cars and trucks seemed to sound. My memory of that day isn’t very clear: I probably took twenty steps, took my selfie, and turned around. I ended up getting lost in Chinatown, and discovering that Little Italy isn’t as little as one would expect.

The day I travelled downtown with my father I remember feeling all the same anxiety, along with the fear of the unknown outcome of the situation I had found myself in. The difference between the first attempt and the second was that I had my own personal champion with me to guide me through it all. He walked a few steps ahead; something to this day he still reprimands me for. We have deep discussions about the fact that I can never keep up with his pace when we walk. “We are not rhinos, why do you always walk behind me?” –  The agreed upon explanation is that my legs are shorter than his, so I take two steps for every one step of his.

Our legs are basically the same in length, but we’ll just gloss over that for now.

On that day he turned around and smiled at me without saying a word about the speed that I was walking or how far behind him I was. When I froze in fear of seeing all the vehicles passing underneath, he waited for me to find my own courage to continue. I felt five again, but I felt safe. The Ring would get to Mordor, but at a pace I was comfortable with. Middle Earth could wait.

We stopped in the middle of the bridge to have a touristy moment without having to pay the touristy price. Just on the horizon was the Statue of Liberty, so tiny in the distance. How insignificant it seemed, after all of the films I had watched as a child. I sensed that the comfort of realising my trials were over and a new chapter was beginning was not as a result of the marvel of this beacon of the New World, but my father’s presence – even while recounting the opening sequence from the second film in the Godfather trilogy. He was the beacon of hope guiding my way.

We made our way to the other side of the bridge, stopping in a small restaurant to have two milkshakes and share a plate of fries. It didn’t matter that between us we only had enough money to share a cheap lunch and buy a return ticket for the subway. We were happy together, sharing an experience that under the circumstances we thought might not have happened, but were content with nonetheless.

I had been in New York for eight months before he had arrived and had already tired at the tourist stuff, but sightseeing together gave me a fresh perspective on what I had become accustomed to. I remember rushing through the busy streets of Times Square only to hear him shout “Slow down! I want to take everything in.” Life lesson, right there. I had gotten used to the fast-paced nature of the city and what the people that had brought me there expected of me. Here was someone who – although thirty years my senior – was not jaded by the insanity of the American Dream. Realising this, I knew where I wanted to take him. A place where even in my loudest moments I could find solace away from all my troubles.

Sitting on a lakeside bench in Central Park, my father and I spoke as people and not as an adult and their child for the first time in my life. In that moment I realised the deep love that this man has for his family, and the deep pain it caused him to see someone he cared for suffering. I wouldn’t have known at that time that or relationship would deepen and grow over the years to come, but at that moment I knew one thing without a doubt in my mind.

As a child you have many dreams of what your future will be. Most times it’s as a result of what others expect of you. On a warm summer’s day in Central Park, in the heart of New York City, I knew what I expected of myself:

And so I guess it goes without saying:

When I grow up, I want to be just like my dad